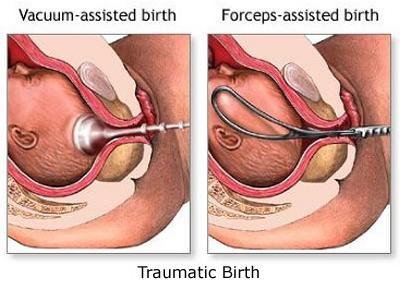 Birth Trauma May Occur Frequently
Traumatic Birth Syndromes are more common than you might think. A German medical researcher discovered that over 80 percent of the infants that he examined shortly after birth were suffering from injuries to the cervical spine, the neck, causing all types of health problems.

Believe it or not, there are 44 countries with a better infant mortality rate than the United States according to the 2012 CIA Factbook.

Dr. Abraham Towbin, from Harvard Medical School and the Department of Pathology found that “the birth process, even under optimal conditions, is potentially a traumatic, crippling event for the fetus.”

“Spinal cord and brain stem injuries occur often during the process of birth but frequently escape diagnosis.” Dr. Towbin continues, “In severe instances death may occur during delivery or, in cases where respiratory function is depressed, a short period after birth. Infants who survive the initial effects may be left with severe nervous system defects.”

The neck is an area of the body that cannot afford to have an injury remain uncorrected. Since injuries here can affect the brain stem, all the vital functions of the body are inhibited. This can occur whether there are symptoms present or not.

Neck Injuries Can Affect the Entire Body
Do you remember what happened to Christopher Reeve, the actor who played Superman in the movies? He was riding his horse and fell on his head, breaking a bone in his upper neck.

In interviews after his injury, it was clear that he was unable to breathe without the use of a ventilator machine. He also was unable to control his elimination system. Many of his other bodily functions were altered. “How could this be?” you might ask, “He didn’t hurt his lungs, his bowel, or his bladder. He hurt his neck.”

This is precisely the point. When the neck is injured, the entire body is affected. When there is an injury to the spine, the organs and systems supplied by those nerves become dysfunctional. These injuries, which are very often vertebral subluxations, can alter the course of a person’s life if not immediately corrected.

A healthy spine and nervous system will ensure your baby’s development during every stage of their life. Don’t wait for a crisis. Make an appointment to have a spinal examination performed by a chiropractor who is trained to find and correct these injuries whether they are symptomatic or not.